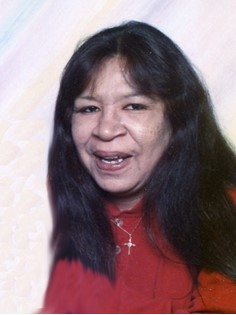 Guestbook 4
Vianna Behan, 63, of Riverton passed away at Sage West Hospital – Riverton on Thursday, March 10. 2022. A wake will be held at Heritage Hall at the Fremont Fairgrounds starting at 5:00 pm on Tuesday, March 15, 2022. The funeral will be held at 10:00 am on Wednesday, March 16, 2022, at St. Stephen’s Catholic Church with burial to follow at the Arapaho Catholic Cemetery.

Vianna Marie C’Hair was born on July 22, 1958 in Riverton, WY to Louis C’Hair and Norma (Goes In Lodge) Draper. She grew up in Cheyenn, WY and later moved to Green Bay, WI until finally coming home to Arapaho on the Wind River Reservation.

Vianna was baptized into the Catholic faith and was a member at St. Stephen’s Catholic Church.

She earned her G.E.D. and worked as a nurse and housekeeper.

Vianna loved spending time taking care of her grandchildren, being with family, shopping, and going to the casino.