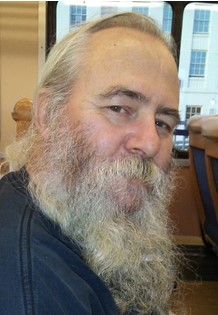 Guestbook 4
Wayne had hoped to one day to jump from a perfectly good airplane. After a short stay at Sage West Hospital in Riverton, WY, Wayne Leon Baker left his disease ravaged body early March 8th, 2022. His older sister, Deana was by his side. He jumped from that airplane to a peaceful place without pain.

Wayne was born on December 1, 1961, in Jackson, Wyoming to George R. and Ramona E. (Beaver) Baker. Wayne travelled Wyoming with his family. When asked where he was from, his response was, "Name a spot in Wyoming and I've either lived there or driven through it". He graduated from Niobrara County High School in Lusk, Wy. in 1980. He also attended schools in Jeffery City, Gas Hills, Cheyenne, Torrington, Huntley, and Veteran, Wy (Goshen Hole).

After high school, Wayne wanted to see the world, so he joined the Air Force. He was stationed in....Minot, ND. He often stated that he would have gone AWOL but they would have seen him for three days. Once discharged, Wayne attended Cheyenne Aeronautical Center in Cheyenne, Wy. There he received his A and P (Airframe and Powerplant) license. With his newly minted license in hand, Wayne worked in Colorado, Arizona, and Wyoming. After working for a few places in Anchorage, Alaska Wayne and his toolbox landed at Lynden Air Cargo. He had found his dream job. Wayne travelled the world. He filled several passports during his tenure. His feet touched all seven continents at least once. He often said that his job with Lynden was the best that he'd ever had. In 2021, Wayne's health declined so he had to take early retirement from the company that he loved.

Outside of work, Wayne participated in the SCA (Society of Creative Anachronism). Lord Connor Blackhawk resided in the household of Schlagen Haus in the Barony of Eskalya in the Principality of Oertha in the Kingdom of the West. He participated in many events including the Estrella War. Wayne was a gear head who enjoyed tinkering with motors, cars, motorcycles, and firearms. Wayne always had stuff laying around that was in different stages of assembly. Often it was harder for him to reassemble the stuff that he took apart. When he did so, he had a masterpiece.

Once Wayne didn't have to travel out of town as often, he found a dog. Indie, a golden retriever, got him involved in agility. Together they competed in NADAC trials and received several titles. Radar and Rascal were also trained and ran in trials. Wayne went on many motorcycle tours with his friend and neighbor Sandy Wilbur. He loved Harley Davidson motorcycles and had several of them. In the wintertime, Wayne liked to take the occasional cruise "to get warm". That was something that he missed with the Covid restrictions. Wayne is survived by his parents George R. and Margaret A. (Fricke) Baker, Torrington, Wy; older brother John Weimann, Morristown, NJ; older sister Deana, Cody, Wy; younger sister Kimberly "Grinchie” (John) Putnam, Riverton, WY; younger brothers William (Roxanne), Loren, and Derek (Ann) Baker, Torrington, Wy; and several cousins, nieces and nephews. He is survived by several friends including Elaine, Charlie Presler, Sandy Wilbur all of Anchorage, AK. He is missed by his dog, Rascal.

He was preceded in death by his mother Ramona; his grandparents; Uncles Jim Baker and George Beaver and Aunt Judith (David) Michaud. Celebration of life services are pending but there will be one in Torrington WY and one in Anchorage AK. Wayne would not want a mournful service. He would want an adventurous one that includes bikes, swords, beer, and life. Go forward...until next time

Arrangements are under the direction of the Davis Funeral Home and Crematory, Riverton, Wyoming.