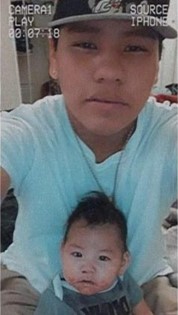 Nathan Charles Loneman, Jr. was born on December 23, 2004 in Lander, WY to Nathan Loneman, Sr. and Theresa Maire Antelope. He was known at “Baby Nate” and grew up in the Riverton area attending school at Riverton High School.

Nathan believed in the Traditional Native American ways and participated in the Sun Dance, was a singer and played the hand drum.

He worked at Svilars in Hudson Wyoming.