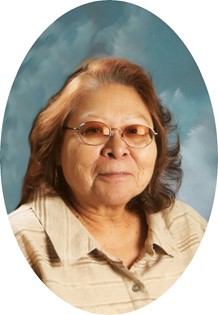 Judith Loretta Warren was born on September 4, 1952 in Riverton, WY to Hubert Edmond Warren, Sr. and Inez Rosalia (Jenkins) Warren. She grew up on the Wind River Reservation and attended schools there. She also attended Haskell Indian College in Lawrence, KS, Loretto Height College, Denver, CO, and University of Wyoming, Laramie, WY. She lived most of her life on the Wind River Reservation and some time in Brigham City, UT.

Judith was baptized into the Catholic Faith. She attended St. Stephen’s Catholic Church and served as a CYO Youth Minister and as an Eucharistic Minister. She also worked at the church as a janitor and cook for many years.

Before working at the church, she was a bus driver for the St. Stephen’s school, an receptionist at Arapaho School, a bus driver and family service worker for Shoshone Arapaho Headstart; and a school dorm attendant for Intermountain Indian School.

On line condolences may be made at TheDavisFuneralHome.com