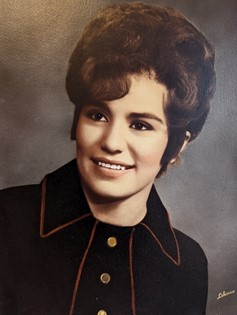 Guestbook 15
Funeral services for Esther Alice Manzanares, 70, will be held at 2:00 p.m., Monday, July 11, 2022 at Davis Funeral Home. A viewing will be held prior to the service beginning at noon.

Mrs. Manzanares passed away on Wednesday, July 6, 2022 at the Wyoming Medical Center in Casper, Wyoming.

Esther was born on April 13, 1952, daughter of Eddy and Mary (Montoya) Martinez in Riverton, Wyoming. She went to Riverton High School and Central Wyoming College where she earned her Associates Degree in Criminal Justice.

Esther married Leroy Nash Manzanares on November 15, 1969 in Riverton. Leroy preceded her in death April 21, 2022 after 52 years of marriage. The couple owned two businesses over the years including M&M Drywall for over 30 years and Rearview Images for 6 years. Esther also worked for DH Print for 16 years and TSA for 10 years.

She was an avid bowler, loved poker and gambling, loved her computer games, taking care of her lawn, flowers and veggies. She loved camping, fishing, and playing with her grandkids. She loved her cars, her goats, the Denver Broncos and any sports her sons and grandkids were involved in. She also served as president of the Babe Ruth Baseball Club.

She is preceded in death by her husband, Leroy; her parents, Mary and Eddy Martinez; brother, Lee Martinez; and infant son, James Douglas “Kricket” Manzanares. On-line condolences can be made at TheDavisFuneralHome.com.

Service are under the direction of Davis Funeral Home and Crematory.