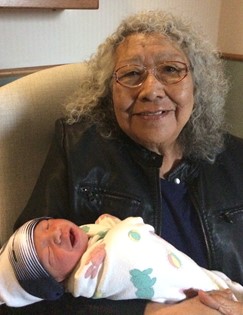 Colleen Marie Sun Rhodes was born on September19, 1941 in Fort Washakie, WY to Ernest and Ruth (Friday) Limpy Sun Rhoades. Her given Araphao name was Hisei Neniisiiseet, “She Likes to Walk Alone.” She graduated from Haskell High School and earned her Associates Degree from Haskell Indian College.

Colleen was a member of St. Stephen’s Catholic Church. She was baptized into the Catholic Faith and participated in the traditional ceremonies.

In 1966 she married Floyd Joseph Addison, Sr. Together they raised their children in the Bay Area. Later returning to the Wind River Reservation continuing to raise her grandchildren and becoming involved with the Arapaho community.

In her career she worked with the Northern Arapaho Water Board, as a School Bus Driver, and with the Guadalupe Health Clinic.

While living in the Bay Area she was also an activist for the Native American human rights.. She was involved in the American Indian Movement “AIM,” occupation of Alcatraz, the first Longest Walk from San Fransisco to Washington D.C., fighting for rights of Native Americans, and also started a Union for the bus drivers in San Mateo, CA.