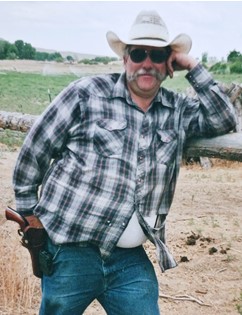 Kirk Edward Koch was born July 31, 1958 in Ann Arbor, Michigan to Keith Eugene. and Barbara Jean Bernice (Bender) Koch. Tater grew up in Pinckney, Michigan and graduated Howell, Michigan High School. After moving to South Carolina, he enlisted and served in the U.S. Army and was honorably discharged after years of service to his country.

Following his discharge from the military he moved to Lander, Wyoming to be close to his dad and remained a Lander resident the rest of his life.

He married the former Linda Rudd of Lander and four children along the way. The couple later divorced and remained lifelong friends.

Tater did carpentry work, worked for the Wyoming State Highway Department until retirement and was a Fremont County Fireman for over 30 years having deployed to the Yellowstone Fire of 1988 and many others. He served as Fire Chief many times.

Tater was passionate about hunting and enjoyed his guns the most along with his family. He was a proud member of the Rocky Mountain Elk Foundation and a lifelong Patriot.

He was preceded in death by his parents, Keith and Barbara Jean; and his sister, Pam Sallows.

Memorials in Tater’s Honor may be made to the Fremont County Fire in care of the Davis Funeral Home, 2203 W. Main Street, Riverton, WY 82501.