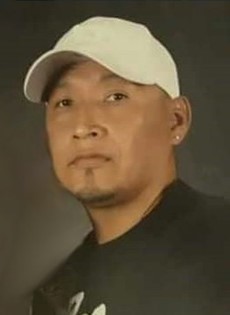 Mr. Blackburn was called home on Sunday, September 4, 2022 at the Wyoming Medical Center in Casper, Wyoming.

He was born on September 12, 1981, son of Thomas “Pat” Blackburn, Sr. and Marie B. SunRhodes in Riverton, Wyoming. Travis was given an Indian Name, “Red Morning Sun” when he was young.

Travis attended St. Stephens Arapaho School and went to high school at Chamawha Indian School in Salem, Oregon before finishing his schooling at St. Stephens High School graduating with the class of 2001. During his late high school year, Travis began his family of eight beautiful children, who he loved and cherished with all his heart. Over the years, Trav worked as an oilfield worker, construction and during his late 30’s, Travis went back to the oilfield. He ended his working career with the Northern Arapaho Tribe.

Travis met the love of his life, Michaelene A. (Friday) Blackburn in 2015. On January 11, 2019, Trav and Michaelene built a beautiful family of 10 children, marrying in Riverton, WY. Travis enjoyed fishing, working out and had a great passion for music. He also loved spending time in the mountains, was a great cook and loved his casino time but he especially loved spending time with his family and friends.

On-line condolences may be made at TheDavisFuneralHome.com. Services are under the direction of Davis Funeral Home, Crematory and Monuments.