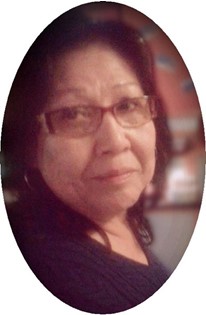 Felicia F. Whiteman was born on January 3, 1953 in Riverton, WY to Felix and Mary Catherine (Behan) Whiteman.  She was a life-long resident of Fremont County but did spend time in Denver, Casper, and Sheridan.  She graduated from Riverton High School and attended Central Wyoming College.

Felicia was baptized into the Catholic Faith and also practiced the Northern Arapaho Traditional Ways.

She was a homemaker but also taught religion at St. Stephen’s Catholic Church, as well as a housekeeper in the Riverton area.

Felicia absolutely loved the music of Credence Clear Water Revival; she knew all of their music.  She enjoyed hunting, fishing, riding horses, and all the outdoors and what it offered.  She loved going to the hills and collecting rocks and putting them by her plants which she took special care of.  Football was a favorite sport of hers that she enjoyed with her children along with all of their sport activities. She loved cooking and having family dinners.