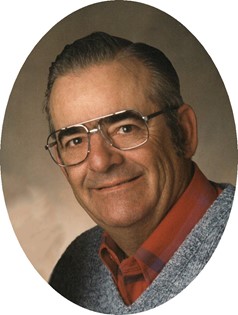 Guestbook 6
Funeral services for George L. Inman of Riverton will be conducted at 2:00 p.m. Saturday, February 14, 2009 at Davis Funeral Home, with Pastor Mark Thurman of the United Methodist Church officiating. Interment will follow at Mountain View Cemetery, with military rites by the Wyoming National Guard.

George LeRoy Inman was born in Seneca, Nebr., on August 15, 1931 to Leon Spencer Inman and Edna Marie (Kier) Inman. He moved here as a young child with his family, and attended Riverton schools, where he participated in high school football and basketball. He was graduated from Riverton High School with the class of 1949.

He began his employment with Pathfinder Mine in 1958, retiring as a mine superintendent in 1996, a position he had held for many years.

The family said Mr. Inman was very proud of serving during the Korean War, and enjoyed studying all war history.

He cared for his mother and wife during their later years, and supported his children and grandchildren in their sporting activities, driving to Elko, Nev., to watch them.

He was preceded in death by his parents; his wife Ellen; son Timothy; daughter Tina; and brother Corky.

On-line obituaries are available and condolences for the family may be made at: thedavisfuneralhome.com Services are under the direction of the Davis Funeral Home of Riverton.