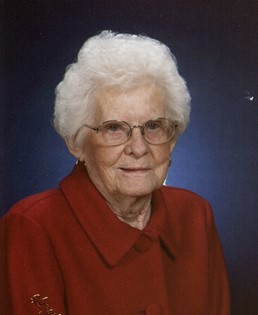 Guestbook 1
Maxyne M. Heidt of Riverton died Thursday morning, May 10, 2007, at Wind River Healthcare in Riverton. She was 92 years old. Funeral services will be at 10 a.m. Monday, May 14, at St. Margaret's Catholic Church in Riverton. There will be a rosary at 7 p.m. Sunday, May 13, at the church. Interment will be at Mountain View Cemetery in Riverton. Maxyne M. McCarty was born in Stromsburg, Neb., on Dec. 18, 1914, the daughter of Joseph Edward McCarty and Lucy C. (Richards) McCarty. She was graduated from high school at St. Ursula's Academy in York, Neb., in 1932. She came to Riverton from York in 1947. She was married in York, Nebraska in 1936 to Jess W. Stork. He preceded her in death. She married John J. Heidt on Sept. 28, 1968, at St. Margaret's Catholic Church in Riverton. Mrs. Heidt was a homemaker, member of St. Margaret's Catholic Church, and active in the RCCW. Survivors include her husband, John; son, Michael Stark and his wife Grace; five grandchildren, Kevin and Brian Stark, Donald and Bill Glade, Christine Glade; four great grandchildren, Nathan Glade, Katherine Glade, Josh Glade, and Lily Stark; a brother, Dan McCarty of Lincoln, Neb. She was preceded in death by her first husband Jess W. Stark, a daughter, Mary Jane; her parents, and two brothers. Memorials may be made to the RCCW, in care of the Davis Funeral Home, 2203 West Main, Riverton, WY 82501. On-line obituaries are available and condolences for the family may be made at: thedavisfuneralhome.com Services are under the direction of the Davis Funeral Home of Riverton.