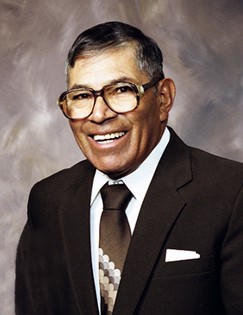 Guestbook 3
Memorial services for Pastor Jose Isabel Sifuentes will be at 2:00 P.M. Saturday, February 21, 2009. His ‘Celebration of Life’ service will be at United Methodist Church, 1116 W Park Avenue, due to expected attendance. Officiating will be Pastor Sifuentes’ son, Pastor Joe L. Sifuentes, Crown of Life Ministries in Riverton, Wyoming.

Jose Isabel Sifuentes was born on July 24, 1915, in Durango, Mexico, the son of Pedro Sifuentes and Anastacia (Rivera) Sifuentes. He grew up in Mexico, and in 1941, he married Herlinda Mauricio. Mr Sifuentes moved to Worland, Wyoming in 1956, with his family, and later receiving the Call to ministry, he moved to Riverton in 1960. He founded, established, and was Pastor of “La Antorcha” Assembly of God for 22 years. This church later became what is presently Way of the Cross A/G. While living in Riverton, he also worked at the old Memorial Hospital and later at Central Wyoming College in maintenance, where he made many friends.

His family said he enjoyed stream fishing, hunting and being with family and friends. The passions of his life that he spoke about continually were, Christ, his salvation experience, and his call to preach. He loved his family, and said they were the joy of his life. After the 1993 death of his wife Herlinda, (married 52 years), he moved to Texas, where he met and married Herminia Chavez, in 1996. They settled in Zapata, Texas. Proving the truth that ‘preachers’ rarely retire, at 80 years old, he founded, and was Pastor of a new missions work, Centro Cristiano Monte Horeb in Zapata. Though he enjoyed Zapata, his expressed desire was that after his death, he would be brought ‘home’ to Riverton, Wy.

Pastor Sifuentes is survived by his wife, Herminia, of Zapata Texas; daughters Irma Holguin of Riverton, Wyoming; and Phyllis Trujillo and husband Robert of Salt Lake City, Utah; sons Pedro De Leon and wife Koleen; Rafael Sifuentes and wife Sandi; and Joe L. Sifuentes and wife Shirlee, all of Riverton Wyoming. He is also survived by numerous grandchildren, great grandchildren, and great, great grandchildren. He was preceded in death by his parents, his wife, Herlinda, son Tonio Valadez, and daughter, Maria Luisa Martinez.

Pastor J. Isabel Sifuentes’ family requests that in lieu of flowers, memorial donations would be made to the Way of the Cross Assembly of God Missions Department.