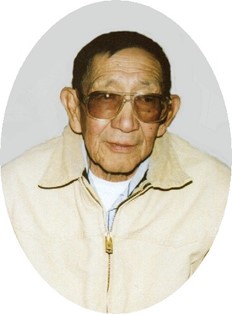 Joseph Oldman of Arapahoe died Tuesday morning, February 24, 2009, at his home. He was 74 years old.

Funeral services will be conducted at 10:00 a.m. on Saturday, February 28, 2009 at St. Stephen’s Catholic Church. Burial will follow at Arapaho Catholic Cemetery at St. Stephens.

Joseph Oldman, whose Indian name is “Sits in the Sun”, was born in Arapahoe on September 1, 1934 to Daniel Oldman, Sr. and Esther (Headley) Oldman.

He attended school at St. Stephen’s Mission through the 11th grade, then obtained his GED. He then went to vocational schools, an ironworking school in Casper and a printing school in Thermopolis.

On January 24, 1957 he married Myrtle White Antelope in Riverton.

Mr. Oldman was a retired member of the Northern Arapahoe Tribe Business Council, to which he was first elected in 1976, and served various terms totaling 16 years, retiring in 2002. He had been employed by Arapaho Ranch, Sho Rap Fire Fighters, worked construction with his brothers, was a truck driver for Lucky Mc Mining Co., a printer for the Thermopolis Independent Record, the Riverton Ranger and the Wind River Press, was an Indian Child Welfare Advocate and a rancher most of his life. He, along with Ken Potter, was a co-founder of the Wind River Press.

The family said Mr. Oldman’s hobbies were spending time with his grandchildren and watching them play sports. He enjoyed going to pow-wows, hunting, landscaping, and visiting with friends and relatives. In his younger days, he played basketball, softball and baseball.