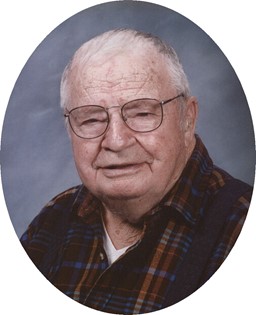 Funeral services for Arnold C. Becker of Riverton will be conducted at Immanuel Lutheran Church in Sheridan at 2:00 p.m. Monday, March 9, 2009. Burial will follow at the Sheridan Cemetery, with military rites by the American Legion Post No. 7.

Arnold Charles Becker was born in Vedigre, Neb. on July 4, 1911, the son of Armnius M. Becker and Louisa (Koeppe) Becker.

Mr. Becker lived in Riverton for 16 years and Sheridan for 44 years.

He served as a sergeant in the U.S. Army during World War II, and was an anti-aircraft gunner in the German theatre.

Mr. Becker was a member of Immanuel Lutheran Church in Sheridan, where he was an elder.

He was self-employed as a trucker and owned Becker Trucking. Mr. Becker hauled the second load of uranium out of the Gas Hills, and had been employed by Peter Kiewitt, Gilpatrick Construction and McGarvin-Moberly. He helped build roads into the missile silos in Cheyenne, and had worked all the interstate highways in Wyoming.

He held a valid CDL until the age of 92.

The family said Mr. Becker enjoyed fishing and snowmobiling, and was a member of the Lake DeSmet Boat Club.

In addition to his wife Doris, he was preceded in death by 12 brothers and sisters, and a daughter Peggy Lynn Becker.

Memorials may be made to Immanuel Lutheran Church, in care of Kane Funeral Home, 689 Meridian, Sheridan, WY 82801.