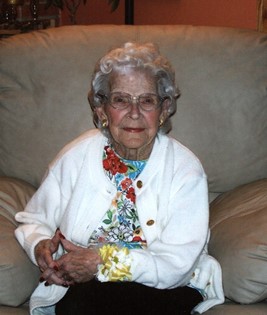 Guestbook 1
No services will be held for Ruby Ina Duncan, 97, who died March 7, 2009 at Westward Heights Care Center in Lander, Wyoming. Cremation has taken place. Memorial contributions may be made to the donor’s choice.

She was born March 20, 1911, in Foster, Nebraska, daughter of Leo R. and Una Belle (Holmes) Huffman. In 1928, she graduated from Ft. Laramie High School. Ruby then married George D. Duncan December 26, 1928 in Ft. Laramie, WY. She and her husband farmed on the southwest rim of Lingle from 1927 until 1975. They then bought the South Sale Barn in Torrington in 1976 and moved into town.

Ruby was a member of the Presbyterian Church, Moose Lodge and the Ft. Laramie Women’s Club.

For over 40 years, Ruby enjoyed making latch hook rugs for family and friends. She also enjoyed spending time reading, sewing, working in her flower and vegetable gardens and word and crossword puzzles.

She moved to Lander in 2006 to live with her daughter, Joyce Nolde.

She is preceded in death by her husband, brother, William Huffman, daughters, Peggy McIntosh and Norma Lea Bay and son-in-law, Don Nolde.

Arrangemnts are under the direction of the Davis Funeral Home of Riverton.