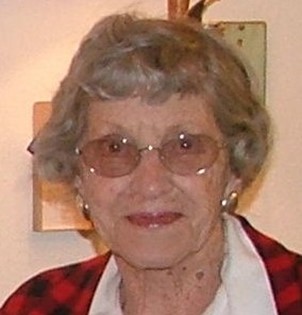 Evelyn was born on a farm near Altamont IL on May 26th, 1914 to William Curtis Stewart and Alta Leach Stewart. In 1921 the family moved to Wyoming due to her mother’s health and ultimately settled in the Thermopolis area where Evelyn attended school. Because of the depression Evelyn left school and found work taking care of a country school teacher’s children close to the Picard and Hayes ranches near Lysite, WY.

Evelyn was married to Raymond Picard in 1932 and moved to the family ranch where they raised three children, Cecil Rae, Jon and Mary. Evelyn was an outstanding cook and wonderful homemaker.

In 1958 Evelyn married Everly Richards and in 1961 moved to Lander where she resided until September of 2008. Upon retirement Everly and Evelyn spent their winters in the Yuma, AZ area and summered in Lander.

Evelyn enjoyed playing cards with friends, dancing, working in her yard and hosting her extended family.

Evelyn is preceded in death by her husband, Everly, her parents, five siblings, a dear grandson, Solon Slafter and her beloved son, Jon Picard.

Survivors include her daughters, Cecil Rae (Bert) Slafter of Phoenix, AZ and Lysite, WY, Mary (Dallas) Horton of Ft. Collins, CO, four grandsons, Raymond Picard of Casper, WY, Jon Picard of Holts Summit, MO, Stewart Slafter of Oakland, CA and John Shaffer of Baltimore, MD, 5 great grand children and nephew, Harold (Dorothy) York of Riverton, WY. Evelyn was a true example of the western spirit and will be missed by her family who thank her for the example she set and by her dear friends that she cherished.

A private family graveside burial will take place at the Lake View Cemetery in Shoshoni, WY. A memorial will be held for her in June of 2009 and the time and place will be announced in the paper.

Donations in Evelyn’s memory may be made to the Fremont County Pioneer Museum in Lander or to the Shoshoni Senior Citizens Center both c/o The Davis Funeral Home, 2203 W. Main St., Riverton, WY 82501