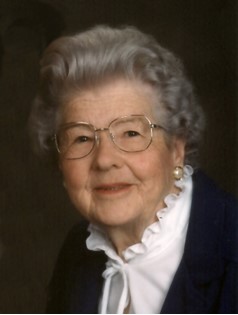 Guestbook 4
Long time Riverton resident and business owner Lorraine Cloe (Martin) Warpness passed away Monday afternoon at the Lander Regional Hospital. For the last few years Lorraine has been in declining health as a resident of Westward Heights Care Center in Lander. Services will be at the Davis Funeral Home, Friday, April 3, 2009 at 10:00 am. The Reverend Mark Thurman of the Riverton United Methodist Church will officiate. Lorraine was born January 30, 1921 in Elkhart, Kansas. The Martin family was blown out of Kansas during the dust bowl days arriving in Riverton in 1937 with six children and $60. She was married to her husband Arnold Warpness for sixty years. Lorraine spent her life in Fremont County graduating from Riverton High School in 1939. She was known as an extremely hard working person with a very soft heart. She is perhaps best known as the owner and operator of the Fashion Bar, a high end dress store serving Riverton in the 60’s and 70’s, out of the current Union Cellular building at 214 E. Main Street. She and her husband Arnold built and leased the USDA building on Broadway in 1975. They along with Lorraine’s brothers, Curt Martin, wife Saundi and Jim Martin entered into another business venture by purchasing the community of Farson, Wyoming where they lived and worked for many years, making numerous friends. Lorraine was also very active in civic affairs, one of which was being a founding member of the local DAR (Daughters of the American Revolution) organization. She was also on the City of Riverton’s first planning commission of which she was very proud. She worked on many legislative issues, was a longtime member of the Progressive Womens Club and was always on the go. She was a past member of the Riverton Church of the Nazarene. Her greatest pride was her two granddaughters Heather (Warpness) Brown and Wendy (Warpness) Gebhart. Lorraine was preceded in death by her husband Arnold, mother Martha Martin, father Roy Martin, brothers Pepper & Jim Martin and sister Norma (Martin) Blumenshine. Lorraine is survived by her only son Ron Warpness and wife Helen of Riverton, their two daughters Heather (Warpness) Brown, husband Kevin of Ft. Collins and their four children Taylor, Bailey, Addison and Kasen; Wendy (Warpness) Gebhart, husband Jason and son Finn of Lander. She is also survived by her younger brother Curt and his wife Saundi of San Felipe, Mexico and sister Donnice (Martin) Greenwood of Wichita, Kansas. There are numerous nieces and nephews that were very special to her as well. Memorials can be made through the Davis Funeral Home to the local chapter of the DAR, to the Riverton Hospice Home or to a charity of your choice. On-line obituaries are available and condolences for the family may be made at: www.thedavisfuneralhome.com Services are under the direction of the Davis Funeral Home of Riverton, Wyoming.