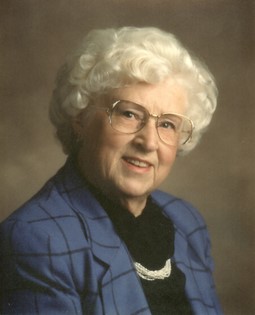 Guestbook 2
Funeral services for Irene C. Hawk will be at 10 a.m. Saturday, May 19, at the United Presbyterian Church of Riverton. Pastor James Shuman will officiate. Interment will follow at Mountain View Cemetery in Riverton. There will be a viewing from 8:30-10 a.m. Saturday at the church. Mrs. Hawk died at her home in Riverton Monday morning, May 14, 2007. She was 87 years old. Irene C. Currey was born on Jan 12, 1920, in Almeria, Neb., the daughter of Ralph and Mable (Yocum) Currey. She was the oldest daughter in the family and had nine siblings. She grew up in Newcastle and was graduated from Newcastle High School with the Class of 1939. She met her future husband, Orie Kenneth "Ken" Hawk, in Newcastle and they were married on June 17, 1939, in Custer, S.D. They moved to Vancouver, Wash., where Mrs. Hawk worked as a shipyard welder. They returned to Wyoming and, in 1945, she managed the Midwest Drug Store in Midwest until moving to Riverton in 1960, where they purchased the Coast to Coast Store and owned and operated it as a couple until retiring in 1978, selling the business to Jerry and Lynne Hawk. Mrs. Hawk was a member of the Presbyterian faith and served as a Deacon and an Elder for the United Presbyterian Church of Riverton. Active in her church she was an officer with the Presbyterian Women. She was a member of the Mountain View Homemakers Club of Riverton, past member of the Business and Professional Women's Club, and a past member of the B.P.O.Does. Her family said she loved to knit and crochet, enjoyed yard work, gardening, canning, took care of and enjoyed her grandchildren, and enjoyed traveling and camping trips with her family. Mrs. Hawk is survived by her son, Jerry Hawk and his wife Lynne of Riverton, their children Leann Nidiffer and husband Nathan of State College, Penn., their children Nicholas and Alexandra Nidiffer, and Jerry and Lynne's son, Jason Hawk of Riverton; a daughter, Shirley Hawk of Riverton and her son, Todd Roberts and wife Jane of Carroll, Iowa, and their children, Sarah, Natalie, and Erin, and Shirley's daughter Destiny Omoto and husband Dan of San Ramon, Calif.; a brother, Dwain Currey and his wife Eve of Gresham, Oregon; sister, Maxine Nyquist and her husband Carter of Sheridan. She was preceded in death by her husband, Ken Hawk, on Dec. 7, 1987; her parents, five brothers, and two sisters. Memorials may be made to the United Presbyterian Church in Riverton in care of the Davis Funeral Home, 2203 West Main, Riverton WY 82501. On-line obituaries are available and condolences for the family may be made at: thedavisfuneralhome.com Services are under the direction of the Davis Funeral Home of Riverton.