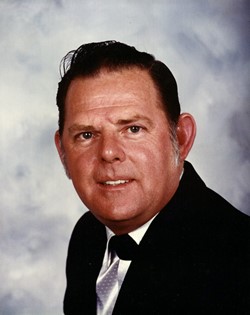 Guestbook 3
Funeral services for Leonard J. “Joe” Bright will be conducted at 10:00 a.m. Wednesday, April 8, 2009 at the Riverton United Methodist Church with the Rev. Mark Thurman officiating. Interment will follow at Mountain View Cemetery with military rites by the Wyoming National Guard.

Leonard Joe Bright was born in Thermopolis on July 1, 1937, the son of Donald M. Bright and Ruth P. (Lawrence) Bright. He grew up in Wyoming, California and Colorado, as his father was required to move around with his job as an auto body man. He attended Natrona County High School in Casper. He also attended school studying to be an apprentice printer.

He enlisted in the U.S. Air Force on Thanksgiving of 1956. He was stationed in Denver, Colo., and San Antonio, Tex., and was honorably discharged on August 20, 1957 from Parks Air Force Base in Pleasanton, Cal., as Airman 3rd Class.

On October 27, 1957 he married Dorothy Wuertz and on January 13, 1973 he married Melva Chitwood. He was later divorced from both. He married Elsie Snyder on September 1, 1983. She survives.

Mr. Bright was employed at the Casper Star Tribune for 22 years, then drove truck for Sinclair in Casper and Sheldon Oil in California. He had also worked for PerTech for five years.

He was a member of the United Methodist Church in Riverton, the Eagles and Good Sam RV Club.

The family said Mr. Bright enjoyed woodworking, four-wheeling, fishing and his R.V., loved to dance and took great pride in his yard.

Memorial donations may be made to the Special Olympics of Riverton, in care of Davis Funeral Home, 2203 W. Main, Riverton, WY 82501.