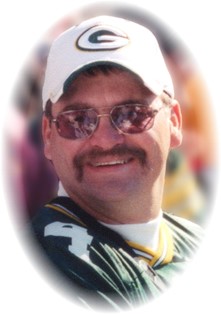 Guestbook 23
Steve Wilson died at his home in Riverton on Easter Sunday morning, April 12, 2009, at the age of 50. After a courageous battle with cancer.

A Viewing will be Friday evening from 5:00 – 7:00 p.m. at the Davis Funeral Home. Cremation will follow the viewing with memorial services at 2 p.m. Saturday, April 18, at James H. Moore Career Center with the Reverend Tommy Means officiating.

Inurnment will follow at Mountain View Cemetery in Riverton.

Riverton B.P.O. Elks Lodge No. 1693 will conduct committal services at the memorial and the graveside services.

Steven Fred Wilson was born in Riverton on Nov. 28, 1958, the son of Arthur Leroy Wilson and Shirley Ann (Fike) Wilson. He grew up in the Crowheart area and was graduated from Wind River High School with the Class of 1977.

Mr. Wilson lived in Riverton for most of his life.

He married the former Marie Wicks on Sept. 15, 1984, in Riverton. Mr. Wilson was service manager for Lathrop Equipment, having worked for John Deere in Riverton for 30 years.

Mr. Wilson was an active bowler, serving as president of the ABC/USB league for many years and was secretary of the association for 14 years. He had bowled in eight national tournaments and 30 state tournaments. He bowled the first sanctioned 300 game in Riverton on Dec. 7, 1983, and had a total of five perfect games over the years.

His family said Mr. Wilson loved to play golf and enjoyed family time. His grandsons, they said, were his pride.

Survivors include his wife, Marie Wilson of Riverton; a son, Charlie Gercie and his wife Kristi of Riverton; a daughter, Tammi Henderson and her husband Tye of Powell; two grandsons, Garret and Wyatt Henderson; his father-in-law, Floyd Wicks and wife Helen of Riverton; a brother, Patrick Wilson and wife Cindy of Wisconsin; a sister, Christy Yaffa and husband Gerry of Cheyenne; sisters-in-law, Laura Cornett of Casper, Marge Jones of Lawrenceville, Ga., and Floydene "Shawndee" Lussier of San Antonio, Texas; numerous nieces and nephews, and cousins.

Memorials may be made to the B.P.O. Elks National Foundation, in care of the Davis Funeral Home, 2203 West Main, Riverton WY 82501.