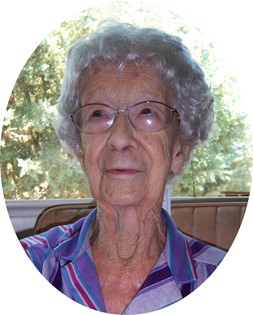 Graveside services will be held on Monday, May 18, 2009 at 1:30 p.m. at Mountain View Cemetery in Riverton. Cremation has taken place.

Bessie Marguerite Heuring was born on June 19, 1906, in Giltner, Neb., the sixth of eight children born to Albert and Bertha (Ballard) Heuring.

Entering kindergarten, she formed a friendship with two classmates and the three remained friends for life, all of them living beyond their 100th birthdays.

On Feb. 20, 1926, she married Vance L. Butler in Omaha, Neb. Mr. Butler was an engineer with the Nebraska Department of Roads for over 50 years and his work took the family throughout the state. As a couple, they lived in 86 different Nebraska towns, some of them, especially Lincoln, several times over the years. Transfers came so quickly that Mrs. Butler often recounted of the time she did the washing in one town, hung out the wash in another, and ironed in the third.

They later settled in Neligh, Neb., for 11 years, then were transferred to Ainsworth, Neb., for 19 years, until Mr. Butler retired from the highway department and they moved to Riverton in 1975 to be near their daughters and families.

Mrs. Butler was a homemaker and member of the United Methodist Church of Riverton. She was a past matron of the Order of the Eastern Star in Neligh, Neb., a member of Chapter AP, P.E.O., in Riverton and past president Chapter CQ, P.E.O. in Neligh. She belonged to the Meadowlark Good Sam Club in Riverton, and had been active in all school, Girl Scout, and Jobs Daughters functions when her daughters were students in Nebraska.