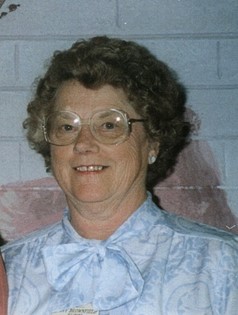 Guestbook 3
Memorial services for Betty J. Brownfield of Riverton will be at 2 p.m. Wednesday, June 6, at the Davis Funeral Home of Riverton. Pastor Michael Johnson of St. John Lutheran Church will officiate. Cremation has taken place. Mrs. Brownfield died at her home in Riverton Wednesday morning, May 22, 2007, at the age of 77. Betty Jane Rosencranz was born in Broadus, Mont., on Oct. 28, 1929, the daughter of Frank and Susie (Farnsworth) Rosencranz. She had nine brothers and three sisters. She grew up north of Hammond, Mont., on her parents' ranch and went to elementary school in Piniele, Mont. She was graduated from Lead (S.D.) High School in 1947 and attended Black Hills Teachers College in Spearfish, S.D. She started teaching in rural grade schools at Ridge, Mont., in 1948-49. In 1949-50, she taught on Box Elder Creek. On Aug. 6, 1950, she married her childhood friend Robert Brownfield. The couple moved to the Earl Brownfield ranch where they ran sheep and built their first two-room house. They worked the ranch for 17 years and her family said Mrs. Brownfield was a hard worker, excellent cook, and caregiver. Their son, Ralph, was born on July 6, 1951, and son Leo was born on Sept. 15, 1952. The family said Mrs. Brownfield enjoyed raising bum lambs, chickens, gardening, flowers, cooking, and was an excellent housekeeper. When the family left the ranch in 1967, Mrs. Brownfield returned to school teaching. They moved to Riverton in 1969, and she began working as a bookkeeper at Riverton Memorial Hospital, a job she held for 24 years. Over their 56 years of marriage, the couple enjoyed traveling and sight seeing, along with Western dances. After they retired, they bought a winter home in Arizona which they enjoyed for 12 years. When her health began to fail, they sold the Arizona home and remained in Riverton. Mrs. Brownfield is survived by her husband of 56 years, Robert Brownfield; sons, Ralph Brownfield and his wife Emily of Hammond, Mont., and Leo Brownfield of Ayrshire, Iowa; granddaughter, Dana; grandsons, Jay, Jasen, Ashley, Travis, Clayton; six great grandchildren; brothers, Jerry Rosencranz, James Rosencranz, Bill Rosencranz, and Frank Rosencranz,; sister, Gladys Williams, and numerous nieces and nephews. She was preceded in death by her parents, Frank and Susie Rosencranz; brothers, Art Rosencranz, Ernest Rosencranz, Morris Rosencranz, Pete Rosencranz, and Francis Rosencranz; sisters, Cara Freier and Alvina Study; infant, Virgil. Memorials may be made to a charity of the donor's choice. On-line obituaries are available and condolences for the family may be made at: thedavisfuneralhome.com Services are under the direction of the Davis Funeral Home of Riverton.