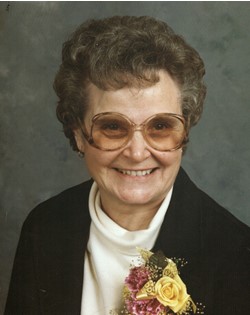 Graveside services will be at 10 a.m. Thursday, May 28, at Mountain View Cemetery in Riverton with Pastor Mike Smith officiating. There will be a viewing from 8:30 to 9:30 a.m. Thursday at the Davis Funeral Home of Riverton.

Genevieve Mary Fountaine was born in Red Cloud, Neb., on Dec. 27, 1921, the daughter of Ray Alfred Fountaine and Auva Margaret (Dow) Fountaine. She was graduated from Red Cloud High School.

She lived in Briggsdale, Colo., for 27 years, where she worked as a post office clerk from 1947 to 1968. She continued as a postal clerk in Greeley, Colo. In Greeley, she also worked as a nurses' aide at the Weld County Hospital and had been secretary for the Green Thumb program there. In addition, she lived in Grand Prairie, Texas, for one year and in Arizona for three years before coming to Riverton a number of years ago.

Mrs. Carter was a member of the Hillcrest Baptist Church. In Briggsdale, she had served as a Sunday School teacher and was secretary for the church and Sunday School.

Her family said she liked to make quilts, liked to bake and loved being with her great grandchildren.

She was preceded in death by her parents, two brother, five sisters, and a son-in-law, Larry Morris, and two husbands, Byron Jenkins and Lawrence Carter.

Memorials may be made to Little Wind Hospice in care of the Davis Funeral Home, 2203 West Main, Riverton, WY 82501.