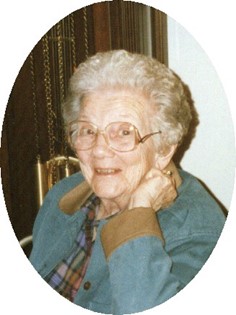 Guestbook 6
Funeral services for Winifred McDonald of Riverton will be at 11 a.m. Monday, June 1, 2009, at the Davis Funeral Home of Riverton. Pastor Dale Adams of First Baptist Church will officiate.

Mrs. McDonald died at Westward Heights Care Center in Lander on Tuesday, May 26, 2009. She was 99 years old.

Winifred Hummel was born in New Ulm, Minn., on Jan. 30, 1910, the daughter of August and Anna (Dietz) Hummel. She was graduated from New Ulm High School in 1928 and went on to being graduated from Miss Wood's Kindergarten and Primary Training School in Minneapolis, Minn.

She married Walt McDonald in the parsonage of Riverton's Methodist Church on Federal Blvd. on May 24, 1937.

Mr. McDonald with his brother Roy had purchased Riverton Motor Co. in April of that year.

Mrs. McDonald continued to teach until January of 1938 when she moved from that career teaching the second grade at the old Jefferson School.

For a short time, she drove school bus then worked at the original Kline's Store, selling classic women's clothing.

During World War II, Mrs. McDonald started driving truck with her husband and delivering gas and cases of oil, primarily to the oil rigs in the Dubois area, to farmers, and crossing the mountain to road construction crews.

In 1965, she returned to the profession of education, starting the local Head Start program.

She completed her working career as educational director for School District 25, requiring her to travel and be away from home many nights. Mr. McDonald had retired and she joined him in retirement in 1975.

She was preceded in death by her parents; her husband, Walt McDonald on May 4, 2001; three brothers, and two sisters.