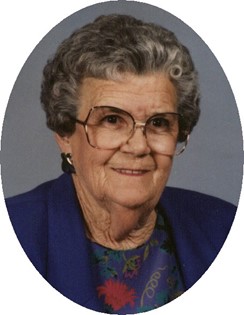 Guestbook 4
Dorothy A. Heckart, a resident of Riverton since 1951, died on Thursday, May 28, 2009, at Westward Heights Care Center in Lander. She was 90 years old. Services will be at 10 a.m. Tuesday, June 2, at the United Methodist Church in Riverton with the Rev. Mark Thurman officiating. Interment will follow at Mountain View Cemetery in Riverton. Dorothy A. Hall was born on Aug. 25, 1918, in Manitou Springs, Colo., the daughter of Henry B. hall and Dora B. (Shields) Hall. She was graduated from Manitou High School in 1936 and later took courses in bookkeeping and salesmanship. Prior to World War II, she met Gerald L. "Jerry" Heckart and they were later married at the First Methodist Church o Cheyenne. Following the war, the couple moved to Denver where their son, Dennis, was born. Four months later, the family moved to Torrington, where they lived for five years. Daughter Karalee was born there and soon thereafter, the family moved to Riverton. Her family said this became a special home to Mrs. Heckart. She enjoyed being close to the mountains, where the family later loved fishing the streams and lakes, one of Mrs. Heckart's favorite recreations. For over 50 years, the United Methodist Church was part of her life. She served as Youth Sunday School Superintendent, organized the candy booth each year for many years during the annual church Christmas Bazaar, and, her family said, thoroughly enjoyed participating in the United Methodist Harvest Home dinner. Mrs. Heckart was described as an avoid homemaker. Her family said she enjoyed refinishing furniture, gardening, and house painting. While, they said, her family came first, she was active in a number of community groups. She belonged to Progressive Women's Federated Club as well as Ponderosa. She was a member of P.E.O. and a charter member of Golden K Kiwanis Club. Mrs. Heckart also a charter member of the Riverton Memorial Hospital Auxiliary, serving as manager of the hospital gift shop for many years and serving several time as president of the Hospital Auxiliary. Mrs. Heckart was an active volunteer in other community projects. She helped with the initial fund-raising effort of the Central Wyoming College Arts Center. More recently, she helped with the county-wide effort to garner support for the Help for Health Hospice Home in Riverton. She donated to the Children's Playground in Riverton and the new county museum in Lander. Survivors include her son, Dennis Heckart and his wife Elaine of Riverton; daughter, Karalee Schaefer and her husband Jim of Longmont, Colo.; three grandchildren, Kristin Holthus and husband Dustin and their daughter Taylor of Denver, Colo., Andrea Terry and her husband B.J., of Broomfield, Colo., and Ryan Schaefer of Denver. Mrs. Heckart was preceded in death by her husband of 58 years, Jerry in 1998; a grandson, Jeff, son of Dennis and Elaine Heckart in 2003, and great granddaughter, Riley Lynn, daughter of Kristin and Dustin Holthus in 2008. Memorials may be made to the United Methodist Church of Riverton. Arrangements are under the direction of the Davis Funeral Home of Riverton.