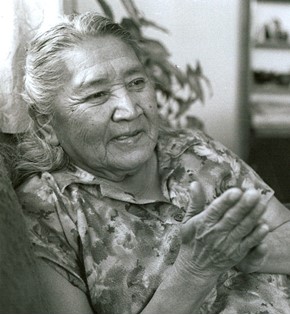 Rosary will be at 7 p.m. Monday, June 22, at St. Stephen's with a wake to follow at the family residence, #95 Littleshield Road, Arapahoe.

Anastasia Blackman was born on July 30, 1931, at Fort Washakie, the daughter of John Blackman and Annie Frances (Black Bull) Blackman.

Her family said she was an expert horsewoman in her teen years and participated in several horse races.

She met and married John Blackburn in 1958. Due to his occupation, they lived in various parts of the country.

During the early years of their marriage, Mrs. Blackburn worked as a nanny, seamstress, and cook's helper. She was a homemaker and caregiver to children, who opened her home to family members, friends, and children.

Mrs. Blackburn was a member of the Catholic faith and the Native American Church.

Her family said Mrs. Blackburn enjoyed making quilts for family members and grandchildren, loved watching boxing and wrestling, going to pow-wows and the sundance, listening to Native American church music, pow-wow, and rock and roll music of the 50s. She made blankets and her family said she was known for fry bread.