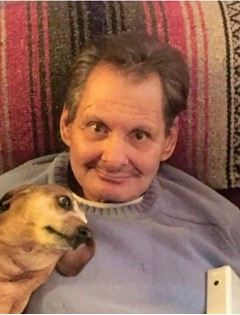 Mr. Naef passed away on Wednesday, November 16, 2022 at the Wyoming Medical Center in Casper, Wyoming.

Russel Stephen Naef was born April 21, 1959 in Phillipsburg Montana to Marilyn Swenson and Ronald Naef. Since Russel could walk, he wanted to be outside. His mother, Marilyn, was constantly running out the door after him.

Throughout his childhood, Russel and his family moved to different parts of the country including Iowa and Montana, before settling in Portage, Michigan. At that time, Russel’s mother remarried, combining two families and adding two brothers and another sister.

In 1977 Russel moved to Riverton to work in the oilfields, where he fell in love with Wyoming. Soon after, he met Kim Peck and they were married in 1981. Russel found fatherhood during this time with the birth of his first two children, Jeremy and Jeb. During this time of his life, he enjoyed hunting, fishing, and taking care of many dogs and horses. Almost every meal during supper contained some sort of game meat. Russel's marriage to Kim ended in 1991.

Russel was introduced to Jeannie at Hells Half Acre and was married in 1996. Through this marriage he gained two additional sons, Rylan and Jeremy, and in the coming years Jeannie blessed Russel with another son, Russel Asa, and his first daughter Aubrey. Russell's favorite times were on the lake with his children, teaching them to fish and passing along the love of fishing. Russel and Jeannie were together for many years and continued their close friendship throughout his life.

Throughout his life, Russel had such a huge heart. He loved his family, friends, animals, and the outdoors. Since his heart was so big, people also loved him. He had a way of connecting with people from all walks of life and he loved sharing what he had to help others. He was rarely without a dog, or multiple dogs. He was happiest living on a piece of land with no neighbors and a great view, where he was free and able to live the life he wanted. Fishing was life for Russel.