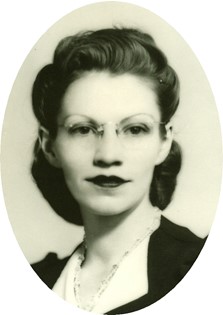 Guestbook 0
Graveside services for Flo Barton of Lander will be at 10 a.m. on Friday, July 24 at Mountain View Cemetery in Riverton. The Rev. Tim Sersen of Faith Lutheran Church of Lander will officiate.

Florence L. Palmer was born in Farmington, Washington on August 15, 1915, the daughter of Leroy Lewis Palmer and Bernice May Warner) Palmer.

During World War II, she worked in the war effort as a riveter on military aircraft.

Mrs. Barton was a long-time resident of Riverton who moved to Lander three years ago.

She had worked as a clerk in sales including long-time employment with Ben's Supermarket in Riverton.

Mr. Barton was of the Methodist faith and her family said she enjoyed crocheting and other crafts.

Survivors include a son, Mike Barton and his wife Linda of Lander; three grandchildren, Drew, Erica, and Haley; a sister, Doris Lisenbee of Lewiston, Idaho.

She was preceded in death by her husband Myron Barton.

Memorials may be made to the National Federation of the Blind in care of Davis Funeral Home, 2203 W. Main Street, Riverton, WY 82501.