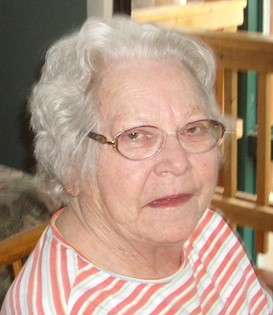 Louise was born on May 11, 1929 in North Loop Nebraska to Louis Theordore Petersen, and Martha Petersen. Her father passed away in 1929. Her family moved from Nebraska to the Riverton Wyoming area in 1943.

She graduated from Pavillion High School in 1948, and was married to Jenner James Mariner on June 10, 1951 in Cody Wyoming. They settled in Jeffrey City, Wyoming in 1960 to raise their family. She remained in Jeffrey City until after her husband’s death in 1996, and then moved to Riverton where she stayed until 2003. She moved to Idaho Falls in January 2003 to be near family.

Louise was very hard working and worked many years in the grocery store in Jeffrey City. She loved to cook, crochet, and spend time with family and friends. She enjoyed sports and played softball and basketball in her youth, and spent many winters snowmobiling with her husband in Wyoming. They made several winter trips into and around Yellowstone, and Grand Teton National Parks together. She also loved to organize picnics on Green Mountain south of Jeffrey City in the summer time for her family and friends.

The family would like to thank the staff at Idaho Falls Health and Rehab for the loving and quality care that she received there in the last two years of her life.