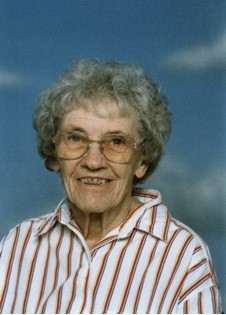 Guestbook 0
Viola S. Fairfield died at her home north of Riverton Thursday evening, May 31, 2007. She was 90 years old. Cremation has been held. Private family services will be held later. Viola S. Bock was born on March 24, 1917, in Belle River, Minn., the daughter of John H. and Susanne (Weisgram) Bock. On Dec. 30, 1935, she married George Everette Fairfield in Sisseton, S.D. The came to Fremont County in 1957 and, following the death of her husband, she made her home with her grandson Lonny and granddaughter Sonja. Her family said she enjoyed cooking and baking, gardening, animals, and loved being with her family and grandchildren. Through the years, she had helped her husband with ranching and mining, crop dusting, and feeding the crew. She is survived by a son, George Fairfield and his wife Dianne of Solon Springs, Wis.; daughter, Brenda Beckman of Riverton; grandchildren, Lonny Fairfield, Bridget Howard, Eric Fairfield, Amy Kline, Kari Fairfield, Josh Beckman, Cori Beckman, and Alex Davis; great grandchildren, Julia, Nicole, Alison, Mariah, Ariel, Haley, Kameron, and Skyler; great-great grandchildren, Alex and Elle; a sister, Alice Quinn of Eden Prairie, Minn. She was preceded in death by her husband, George brothers, John and Cliff, and a sister, Jenn. On-line obituaries are available and condolences for the family may be made at: thedavisfuneralhome.com Services are under the direction of the Davis Funeral Home of Riverton.