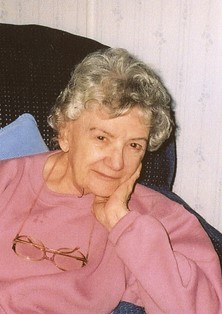 Guestbook 1
Jean Blakely died at Wind River Healthcare in Riverton on Sunday, Sept. 6, 2009, at the age of 86.

Graveside services will be at 2 p.m. on Thursday, Sept. 10, at Mountain View Cemetery in Riverton.

There will be a viewing from 4 to 6 p.m. on Wednesday, Sept. 9, at the Davis Funeral Home of Riverton.

Agnes Jean Powell was born in Sapulpa, Okla., on Nov. 20, 1922, the daughter of Lewis and Ethel Kays Powell. She attended school there and was a member of the United Methodist Church.

In 1956, she married Russell Blakely in Fairfield, Ill. They later moved to St. Petersburg, Fla., where she worked for the St. Petersburg Times for 26 years.

She moved to Riverton in 2001, to be closer to her son, Larry Collins, with whom she lived until 2005 when she moved into Wind River Healthcare because of declining heath.

She was preceded in death by her parents, Lewis and Ethel Powell; husband, Russell Blakely; youngest son, Richard Collins; step-son, Jim Blakely; brothers, Alfred and David Powell, and a granddaughter.