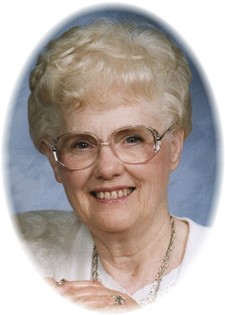 The family requests that memorial contributions be made to the Trinity Lutheran School, 419 East Park Ave, Riverton, Wyoming 82501. She was born May 24, 1923 in Huron, South Dakota, daughter of Charles F. and Laura (Heiden) Schultz. Most of Cleo’s childhood was spent in Huron, SD and the York, NE area.

She and her family moved to Rapid City, SD for her high school years where she graduated in 1941. She then married her beloved husband, Robert Vandervort September 7, 1941 in Rapid City. During WWII, they lived in Southern California while Robert served in the Air Force and Cleo served in a civilian role as a Classification Analyst in the Wage Administration Division at Lemoore Air Force Base.

Following WWII, they moved to Rapid City, SD for a couple of years, before moving to Tomah, WI where they lived for 6 years until moving to Riverton in 1956.

In the 1970's she sold Home Interiors and Gifts, and established a small gift shop for that purpose in her home. Cleo was very active serving her Lord at Trinity Lutheran Church in Riverton. She taught Sunday School, Vacation Bible School, and Mid-week Confirmation classes for decades. Cleo was also very supportive of Christian education and was instrumental in helping to establish Trinity Lutheran School.

Cleo was an avid bridge player who played competitive Duplicate Bridge in numerous state tournaments. Her family says that she also enjoyed painting and won numerous ribbons at the Fremont County Fair and submitted artwork for other competitions as well. Survivors include her husband Robert, of Riverton, sons, Dr. Charles and Christa Vandervort of Green River, WY and Drs. Robert and Vicky Vandervort in Omaha, NE, grandchildren, Julie and Tim Fehlauer of Sheridan, WY, Mark and Laura Vandervort of Bellingham, WA, and Michael Vandervort of Omaha; 3 great grandchildren, her sister, LaVaughn Leedy of Benicia CA as well as numerous nieces and nephews.

Mrs. Vandervort was preceded in death by her parents, Charles and Laura Shultz, and brother, Veril Schultz.