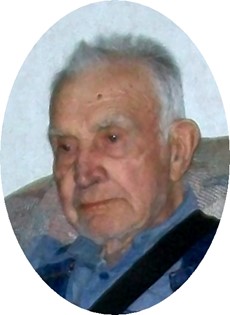 Funeral services will be held at 10:00 a.m. on Friday, October 9, 2009 at Davis Funeral Home with Pastor David Magruder of Trinity Lutheran Church officiating. Interment will follow at Mountain View Cemetery. Military rites will be by the Wyoming National Guard and Riverton Veterans Services Organization.

John Suppes was born June 8, 1916 in Scottsbluff, Nebr., the son of Jacob Suppes and Anna Elizabeth (Mehling) Suppes. He started attending school in Scottsbluff, and when the family moved to Loveland, Colo., he continued there until the 8th grade.

Mr. Suppes owned a 5 acre farm in Loveland, which he traded for a 160 acre farm in Torrington, moving there in the early 1930’s. Later, the family homesteaded in the Missouri Valley area. Mr. Suppes, along with his father and Eddie Wagner, built the farmhouse, digging the basement by hand. They sharecropped with the Tarvers and the Devishes while building the house, which is where he lived until he died.

In 1941 he was drafted into the U.S. Army, actually being inducted in January of 1942. He served under General Patton in the 3rd Army, from the time of the Battle of the Bulge until the end of World War II. During that time he did some interpreting for Gen. Patton, and spent time in Czechoslovakia. He was honorably discharged in January of 1946.

Mr. Suppes was a member of Trinity Lutheran Church.

He had been employed by a contractor working for Midvale Inland Construction Company laying cement blocks, and had operated a gas station before the war.

He was well known in the area for being a potato farmer, beginning to raise them following the war, thus earning the nickname “The Potato Man”.

He was preceded in death by his wife Irene Suppes; his parents; brothers Jake, who died as a child, David, Jake, Fred and Eddie; a sister Lydia.