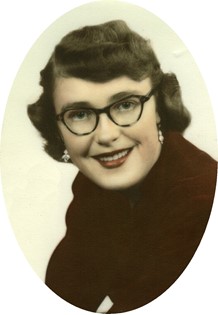 Guestbook 13
Nancy L. Burns of Riverton died at her home on Saturday, Oct. 17, 2009, at the age of 73. Memorial services will be at 2 p.m. on Thursday, Oct. 22, at the Davis Funeral Home of Riverton with Pastor Ian McFarland officiating. Inurnment will follow at Mountain View Cemetery in Riverton. Nancy L. Pascoe was born in Hanna on Feb. 11, 1936, the daughter of Alex James Pascoe and Elizabeth (Freeman) Pascoe. She was a 1954 graduate of Hanna High School and later took higher education classes at Central Wyoming College in Riverton. She married Clifford Burns at the Methodist Church in Hanna on Aug. 13, 1955. The family lived in the Gas Hills from 1960 to 1972, moving into Riverton then. Mrs. Burns was a secretary for Fremont County School District 25 for 24 years and a home/school coordinator, retiring on June 10, 1994. Her family described Mrs. Burns as a people-person whose family was the focus of her life. A homemaker, she enjoyed taking care of her children and grandchildren. She is survived by her husband, Clifford; sons, Curtis Burns and his wife Becky of Cheyenne, Clifford Burns and his wife Sherry of Colorado Springs, Colo., and Tom Burns and his wife Ami of Charleston, S.C.; a daughter, Terry Bauder and her husband Keith of Riverton; 10 grandchildren, Charles Kucera, Seth Kucera, Chelsee Kucera, Jessica Blegh, Sarah Burns, Jorden Johnston, Dennis Johnston, Dawnie Johnston, Erin Burns, and Jaron Burns; one great grandson, Blake Gantenbein; sister, Annabell Buckman and husband Charles of Stransburg, Colo. She was preceded in death by her parents, and two brothers, Terry Dean Pascoe and Alex J. Pascoe. Memorials in her name made be made to St. Jude's Children's Hospital in Denver, in care of the Davis Funeral Home, 2203 West Main, Riverton, WY 82501. On-line obituaries are available and condolences for the family may be made at: thedavisfuneralhome.com Arrangements are under the direction of the Davis Funeral Home of Riverton.