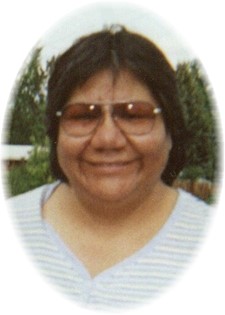 Guestbook 4
A celebration of the life of Tekawitha SunRhodes will be held at 10 a.m. on Tuesday, Dec. 8, 2009, at St. Stephen's Catholic Church. Interment will be at the Arapaho Catholic Cemetery.

Tekawitha Kay SunRhodes, life-long resident of the Wind River Reservation, was born on Aug. 16, 1960 in Riverton, the daughter of Herman J. Moss, Sr. and Eileen (Antelope) Moss. She attended elementary school at the Arapahoe School then graduated from Riverton High School. She attended two years at Central Wyoming College.

She then married Dwight Morry SunRhodes and worked as a flagger, housekeeper, and cashier throughout her life.

Her family said she loved spending time beading, cooking, being around family especially her grandchildren, and making trips to the casino.