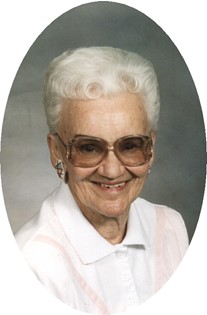 Guestbook 2
Funeral Mass for Jennie M. Walsh of Riverton will be at 10 a.m. Thursday, Dec. 31, at St. Margaret's Catholic Church in Riverton. The Reverends Father Andrew Duncan and Father David Gau will officiate.

Jennie Margaret Sheme was born on April 13, 1924, in Scammon, Kan., the youngest of nine children of John and Ivana (Tomavich) Sheme. She grew up there and was graduated from high school. She received her degree in secretarial studies from Northwest Junior College in Powell, WY.

Mrs. Walsh was baptized into the Catholic faith by the Rev Father David Gau and was a member of St. Margaret's Catholic Church.

She was a 38-year member of the American Legion Auxiliary and the Eagles Auxiliary in Powell.

She worked as a bartender at Clyde's Bar in Powell, at the Pioneer Club, at the Holiday Inn in Cody, and Koe's Bar and Lounge in Ralston. She also did secretarial work for Husky and Conoco Oil of Cody.

She was preceded in death by her parents, her former spouse, four brothers, and four sisters.

Memorials may be made to the Help for Health Hospice Home, in care of the Davis Funeral Home, 2203 West Main, Riverton WY 82501.