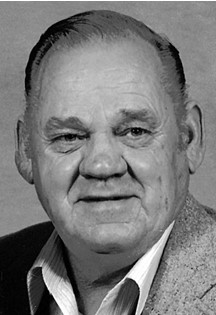 Guestbook 1
John B. Hubbard died at his home in Riverton on Tuesday, June 12, 2007, surrounded by family after suffering a long illness. Funeral services will be at 2 p.m. Saturday, June 16, at the Church of Jesus Christ of Latter-day Saints in Riverton. Bishop Wendell Richardson will officiate. Interment will follow at Mountain View Cemetery in Riverton. There will be a viewing from 5:30-7 p.m. Friday, June 15, at the Davis Funeral Home of Riverton. John B. Hubbard was born in Wheatland on Aug. 30, 1934, the son of Della Mae (Cline) and Jent Fenton Hubbard. He married Bonnie Parker in Riverton on June 7, 1986. As a young man, he worked for Hays General Store, Burleson Drug, and Morning Star Dairy. He also worked for his father, J.F. Hubbard Construction, doing excavation. He worked for Susquehanna Western in the mineral boom years. He formed Hubbard Backhoe and ran that business operation until his health failed. He then started Ideal Auto Electric in 1985, continuing until his death. Mr. Hubbard was an active member of the Riverton Volunteer Fire Department, served on the board of directors of the Riverton Chamber of Commerce, was a past member of the Fraternal Order of Eagles, past member of the Riverton Kiwanis, past member of the Masonic Lodge and Shrine, served on the Riverton City Council for 10 years. He had been a member of the B.P.O.Elks Lodge #1693 for 47 years and was a past exalted ruler. He became Steward of the Elks Club in the 70s and held that position for nine years. His family said Mr. Hubbard enjoyed working with the public in his younger days, along with hunting, fishing, camping. He also enjoyed flying when younger and was a co-owner of an airplane. The family said he always enjoyed spending time with his family, and especially the grandchildren. He was described as an avid reader, especially enjoying the Western books by Louis L'Amour and had collected all of the series. Survivors include his wife of 21 years, Bonnie (Snarr) Hubbard of Riverton; his step-mother, Marcella Hubbard of Casper, formerly of Riverton; mother-in-law, Evelyn Snarr of Bountiful, Utah; sons, John Hubbard of Riverton, and Jason Hubbard and wife Missy of Doha, Qatar; step-sons, Shayne Barlow and wife Tina of Riverton, Scott Barlow and wife Kristin of Riverton, Steve Barlow and wife Brenda of Riverton, Chad Parker and wife Catsy of Salt Lake City, Utah, and Casey Parker of Riverton; siblings, Betty Sheveland of Sylmar, Calif., Jeanette Santilli and husband Al of Casper, Jent Hubbard and wife Joy of Fountain Hills, Ariz., David Hubbard and wife Pat of Kelseyville, Calif., Judy Hubbard of Riverton, and Lisa Hubbard of Casper; sisters-in-law Sandra Slade and husband DeLeon of Bountiful, Utah, and Pam Dow of Bountiful; brother-in-law, Guy Snarr of West Jordan, Utah; grandchildren, Dustin, Katie, Shane, Callie, Kyra, Brittany, Kyle, Kylee, Samantha, Celeste, Dillon, Abigal, Christine, Nicolette, and Shanda; great grandchildren, Rylan and William; many nieces and nephews. He was preceded in death by his mother; father; grandparents; father-in-law, Kenneth Snarr; brothers-in-law, David Cain and Dean Dow; nephew, Travis Snarr; niece, Kristie Sheveland, and an infant sister. Memorials may be made to Little Wind Hospice in care of the Davis Funeral Home, 2203 West Main, Riverton WY 82501. On-line obituaries are available and condolences for the family may be made at: thedavisfuneralhome.com Services are under the direction of the Davis Funeral Home of Riverton.