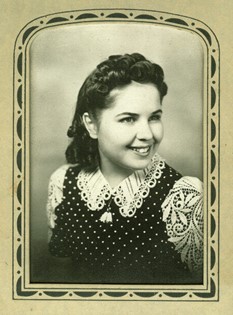 A rosary for Mrs. Millard is at 7 pm on Wed. February 10th at the Davis Funeral Home and a Mass will be at 10 am on February 11th at St. Stephens Catholic Church. Cremation has taken place, and a private family interment will be held.

Clara Elizabeth (Tommy) Spees was born at Burris, WY on January 30, 1924, the daughter of Mae (Lanigan) Spees and Noble Spees. She attended schools at Burris, Lander and St. Agnes Academy in Alliance, NE. She was graduated from Fremont County Vocational High School in 1941.

On March 7, 1943, she married Max L. Millard, of Lander, in San Francisco, where he was stationed prior to being deployed aboard the battleship USS Pennsylvania during WWII.

Mrs. Millard and her husband returned home after his discharge from the Navy and ranched in Fremont County for a number of years. In 1953, the couple opened Max’s Cleaners in Riverton, which she operated with her husband until she became employed with Lucky Mc Uranium Company. In 1966, the family moved to Leadville, CO., where she was employed by St. Vincent’s Hospital. The family returned to Riverton in 1969, and Mrs. Millard again was employed by Lucky Mc/Utah International.

Beth loved her family, her friends, and her extended family here in Fremont County.

She enjoyed camping and fishing, she loved animals, and she particularly enjoyed recounting stories of her family’s early years at Burris and Crowheart.

Mrs. Millard was of the Catholic faith and was an enrolled member of the Eastern Shoshone Tribe.

Her daughter Janet Millard of Riverton who works as an attorney with Baldwin, Crocker and Rudd, survives her. Two sons also survive her. Her older son Glenn Millard, DVM and family ranches and has a veterinary practice at Daniel, WY. Her younger son Kevin Millard and his wife Debra own and operate the Elephant Head Lodge out of Cody, WY near the East Gate of the Yellowstone.

She was preceded in death by her parents, her husband, her two brothers Marvin Spees and Noble Spees, and her daughter-in-law Joan Millard.

In addition to her immediate family Tommy is survived by many cousins, nieces, and nephews. In Fremont County this would include the the Paul and Rosalie Jacobson family, the Charlie and Carmen Needham family, Ren and Ruth Urbigkeit, Bruce and Karen Davison family, the Matt and Kerry Jacobson and family, and Pat Jacobson.