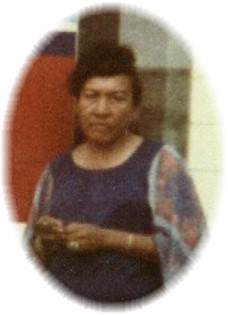 Guestbook 2
Funeral Mass for Margaret Mary "Jackie" Duran of St. Stephen's will be at 10 a.m. on Saturday, Feb. 27, at Great Plains Hall at Arapahoe. The Rev. Father Ron Seminara will officiate. Interment will be at the Arapaho Catholic Cemetery at St. Stephen's.

She was born in Fort Washakie on July 8, 1934, the daughter of Charlie Brown and Annie (Norse) C'Bearing. She attended school at St. Stephen's.

She was a housewife, having married Joseph Duran on June 7, 1982, in Cody.

Mrs. Duran has lived in Hays, Mont., Lawton, Okla., Rapid City South Dakota, and with her husband at the Arapaho Ranch, but lived at Arapahoe for most of her life.

She was a member of the Catholic faith and Native American Church, attending sweats and traditional ceremonies.