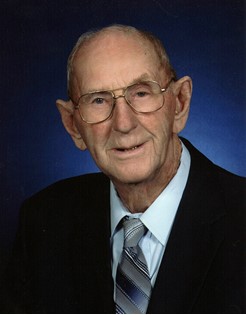 Guestbook 1
Ruben Sinner died on Monday, March 8, 2010 at Westward Heights Care Center in Lander. He was 89. Funeral services will be held at 10 a.m. on Friday, March 12, at St. John Lutheran Church in Riverton with the Rev. Michael Johnson officiating. Burial will follow at Mountain View Cemetery with veterans' honors. Viewing and visitation will be held from 7 to 8 p.m. on Thursday, March 11, at the Davis Funeral Home of Riverton and from 9:30 to 10 a.m. on Friday at St. John Lutheran Church Ruben Sinner was born on May 29, 1920, to Dave and Katherine (Heberlein) Sinner in Greeley, Colo. The family moved to Riverton when he was three years old. He attended the Arapahoe School. Mr. Sinner was a veteran of World War II, serving in the U.S. Army Air Corps. Mr. Sinner worked on the tie drive from Dubois to Riverton, Harold Olson Construction and later Peter Barton Sr. Construction before retiring. He was a member of St. John Lutheran Church in Riverton and was also a member of the V.F.W. Post in Riverton. His family said he enjoyed working in his yard and taking care of the squirrels and pigeons. Survivors include brothers, Harold Sinner and his wife Caroletta, LeRoy Sinner and his wife Karen of Riverton; nieces and nephews, Donald Anderson and his wife Chris of Riverton, Linda Nelson and her husband Brad of Cheyenne, Stephen Sinner of Woodland, Texas, Stacy James and her husband Steve of Riverton, Sharon Karman and her husband James of Baker City, Oregon, David Sinner and his wife Nilwan of Lakeland, Ga., Alan Sinner and his wife Nancy of Riverton; 21 great nieces and nephews. He was preceded in death by his parents; two sisters, Pauline Pearson and her husband Richard, and Leona Anderson and her husband Clarence. Memorials may be made to St. John Lutheran Church, 606 North 8th Street, Riverton, WY 82501. On-line obituaries are available and condolences for the family may be made at: thedavisfuneralhome.com Services are under the direction of the Davis Funeral Home of Riverton.