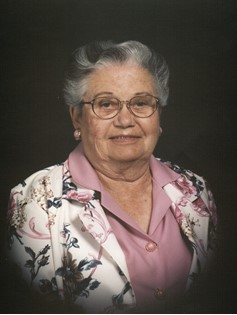 Guestbook 0
Louise Rumery age 87 died early Thursday evening April 1st at Westward Heights Nursing home with family by her side. A Memorial Service will be held Friday April 9th at 10:00 a.m. at Davis Funeral Home. Her cremated remains will be buried beside her late husband Bob Rumery at the Mountain View Cemetary follwing the service. Louise Rumery was born July 13, 1922 in Plattner Colorado the second of four children born to the union of Alice and Edward Sable. Her mother died during the birth of her fourth child. And she was raised in foster homes for the remainder of youth. She graduated from high school in Halsey Nebraska, May of 1941 and married Robert Rumery on May 31st 1941 in Omaha Nebraska. During the first two years of their married life they moved with the construction company that Bob worked for. After Bob was released from Millitary service following World War II, Bob and Louise purchased a farm in Paradise Valley were they farmed and raised a herd of Holstein cows. During the mid sixties they sold the farm in Paradise Vally and purchased serveral hundred acres in North Portal north of Riverton. After the unexpected death of her beloved husband she sold her farm and moved to Riverton were she lived for several years. Later in her life as health concerns arose she moved to Lander to be near her daughter and family.

Louise enjoyed working beside her husband and family on the farm. She loved participating in family activities including holidays, birthdays and gardening. She crocheted an afghan for each of her 5 grand children and many of her great grand children. Before the loss of her eye sight she loved to read and share her books with family and friends.

Mrs Rumery served as a member of the Missouri Valley Womens club, was a Community Leader for the Tri-Valley 4-H Club. She was a member of the Riverton Hospital Auxillary and worked in the gift shop for over 20 years. She was also a member of the Methodist Church and was a devoted member of the ladies fellowship. She is survived by her daughter Patti and husband Pat Hickerson of Lander. Brother Harold Sable and wife Dee of Billings, Sister Wilma Beaufort of St Joseph Missouri, Grandchildren Trish Crippen and husband Darin, Bessie Cantrell and husband Jason of Riverton, Jody Post and husband Kip of Billings, Tanya Knell and husband Bruce, Ryan Hickerson and Fiance Amanda Sempert of Lander. And the love her life 11 Great Grandchildren, Jessica and Tyler Crippen, Adrian and Blake Rumery Rico, Kyara and Kaelyn Post, Taylor and Kortni Knell and Shelby, Patrick and Brayden Hickerson. Step Great Grandchildren Brody, Nick, Rosi and Noah Knell and Step Great Great Grand daughter Kloie Sanders and numerous nieces and nephews. She is preceded in death by her mother and father, husband Robert Rumery, son Jim Rumery and sister Gertrude Strickler. Memorials may be made to the United Methodist Church in Riverton or to a charity of the donors choice. People may visit the online guest book that is available by accessing the Website at www.davisfuneralhome.com