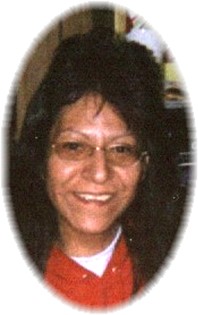 Guestbook 3
Millicent M. "Baby Girl" Brown of Arapahoe died at the Wyoming Medical Center in Casper on Tuesday, April 6, 2010. She was 43. Funeral services will be at 2 p.m. Saturday, April 10, at the Davis Funeral Home of Riverton. Pastor Richard Mills of the Set Free Church will officiate. Cremation will follow. Viewing was Thursday evening at the funeral home. A wake will be held starting at 5 p.m. on Friday, April 9, at 35 Red Crow Road on the Wind River Reservation. Millicent Mae Norse was born in Riverton on Nov. 4, 1966, the daughter of Herman Joseph Norse and Mae Norse-Bull. She attended high school in Thermopolis and was enrolled in the Job Corps in Grand Junction, Colo. She was a homemaker, having married Dawson F. Brown on Feb. 24, 2000, in Cheyenne. She also worked as a head housekeeper in catering and as a hostess and worked in newspaper distribution in Cheyenne. Mrs. Brown had moved to Cheyenne in 1998 and returned to Riverton a year and a half ago. Mrs. Brown was of the Full Gospel Christian faith and was an evangelist helping with youth groups. She was also a member of the All Tribes Indian Church and the Destiny Church. Her family said Mrs. Brown enjoyed reading Mary K. Baxter books, collecting Star Wars memorabilia, going to the casino, working puzzles with her grandchildren, and collecting candles and knick-knacks. Survivors include her husband, Dawson F Brown of Riverton; sons, Gabriel J. Iron and Jeremiah A. Iron; daughter, Rolanda M. C'Bearing; three grandchildren; brothers, Bruce G. Norse, Simon J. Norse, and Robert Blackburn; sisters, Monica Antelope, Irene A. Houser, Millie A. Norse-Martinez, Margaret M. Meyer, and Elsie A. King. She was preceded in death by her parents, Herman and Mae Norse; a step-sister, Marilyn C'Hair; aunts, Annie Martina Bull, Lucy Blackburn, Anastica Blackburn, Joyce Shakespeare, and an uncle, Simon Blackman. On-line obituaries are available and condolences for the family may be made at: thedavisfuneralhome.com Services are under the direction of the Davis Funeral Home of Riverton.