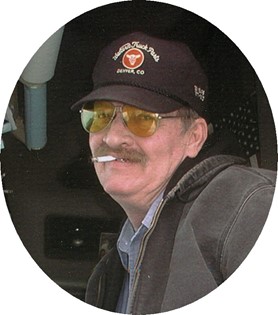 Guestbook 1
Richard A. "Dick" Ivie of Riverton died on Saturday morning, April 17, 2010, after a long battle with colon cancer. He was 64.

Richard Arnold Ivie was born on May 13, 1945, in Greeley, Colo., the son of Arnold B. and Fanny (Jennaway) Ivie. He grew up and attended school in Carr, Colo., finishing his senior year in Briggsdale, Colo.

He married Alice Jenkins in Greeley, Colo. They later divorced. He then married Mary (Phillips) Morris in Gunnison, Colo.

Following his honorable discharge from military service he was employed by various companies throughout Colorado, including Chevron Oil, the Colorado State Patrol, and the Colorado State Highway Department. Locally he worked for CC&T, R&R Rig Service, Gary Jennings Farms, and Riverton Ready Mix. For the past 20 years, Mr. Ivie was self-employed as an independent over-the-road truck driver.

He was preceded in death by his parents, grandparents, ex-spouse, Mary Ivie; former mother-in-law, Genevieve Carter.

Memorial may be made to Little Wind Hospice in care of the Davis Funeral Home, 2203 W. Main Street, Riverton, WY 82501.