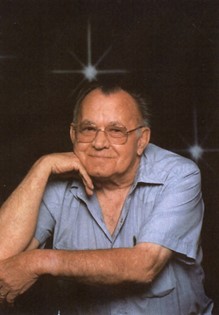 Cremation has taken place. Graveside services will be held at 11:00 a.m. Monday, April 9, 2007 at Mountain View Cemetery with Father Andrew Duncan officiating. Military rites will be conducted by the Wyoming National Guard.

Robert John Coates was born on May 10, 1927, in Sharon Springs, KS, to Walter J. Coates and Isabelle (Welch) Coates.

Mr. Coates was of the Catholic faith. He was a member of the Veterans of Foreign Wars, the American Legion, Fraternal Order of Eagles Aerie #3036 and the Riverton Lodge No. 1693 B.P.O. Elks .

The family said he enjoyed camping, fishing, traveling to visit family and friends, and spending time with his wife and dog Louie.

Mr. Coates was the first foot mail carrier in Riverton. His family said he was the “most handsome”.

Currently, he was a part-time bartender at the Timeout and B&K Shoreline. Previously, he was the steward at the V.F.W. for 18 years, the Eagles for 6 years and worked at the Farson Oregon Trail Café & Bar for 2 years. Prior to that, he had also worked at the Turtle Creek Saloon in Modesto, CA for 15 years.

He was preceded in death by his parents, brothers George and Tom and sister Inez.