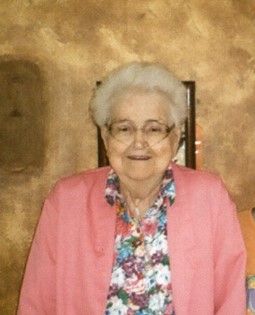 Guestbook 3
Funeral services for Dorothy C. Shoup of Riverton are at 10 a.m. on Saturday, June 19, at the Davis Funeral Home of Riverton. The Rev. Father Allen Lambert will officiate. There will be a viewing from 6 to 7 p.m. Friday at the funeral home. Mrs. Shoup was secretary to the founding director/manager of the Wyoming Mining Association in Riverton, Russ Beamer. Dorothy Coday was born in Mansfield, Mo., on April 30, 1926, the daughter of Jesse M. and Aretha Coday. She grew up in Tulsa, Okla., and attended John Brown Academy at Sulphur Springs, Ark. where she met her future husband, David Hall Shoup, who was a Pearl Harbor survivor. They both attended John Brown University at Shiloh Springs, Ark. and were married in Tulsa, Okla., on May 17, 1944. They had three children -- David Lee Shoup, born in Tulsa, James Fredrick Shoup, born in Camp Campbell, Kentucky, and Mary Sue Shoup, born in Pampa, Texas. The family moved to Riverton from Pampa in November of 1956. Mrs. Shoup worked for Andrews Insurance Agency, Martin Construction Co., and the Wyoming Mining Association in Riverton before going to work as deputy city clerk of the City of Riverton in January of 1969. She was then appointed Riverton City Clerk/Treasurer in November of 1973. She retired from the city in January of 1991. She returned to work for the city as the secretary/receptionist on Aug. 1, 1994 and was promoted to deputy court clerk in June of 1998, until health problems forced her to leave in April of 2004. She had served under every Riverton mayor since Mayor Alva Good. She was a certified municipal clerk, the first life-time member of the Wyoming Water Quality and Pollution Control, where she served several years as secretary-treasurer. Mrs. Shoup was also selected as the first Secretary of the Year in 1965 by the National Secretaries’ Association in Riverton. Mrs. Shoup was a member of the American Legion Auxiliary and the Veterans of Foreign Wars Auxiliary. She also served as secretary/treasurer of the Riverton Rendezvous Committee when it was first organized and was the representative from the City of Riverton for several years. Her family said she enjoyed playing bingo, going to garage sales, reading, and spending time with her family. She was of the Methodist faith and sang in the church choir. Survivors include her husband, David H. Shoup of Riverton; two sons, David Lee Shoup, at the Worland Healthcare and Rehabilitation Center, and James Fredrick Shoup and his wife Denore of Lincoln, Neb.; a daughter, Mary Sue Shoup of Riverton; five grandchildren, Brian James Shoup, Eric Lee Shoup, Peter James Shoup, Dawn Ann Shoup, and Jimmy Shoup; four great grandchildren, Jessica and Bobby Gann, Dillon Shoup, and Devon Shoup. She was preceded in death by her parents; brothers, Ernie Coday, Howard Coday, and Tom Coday; sisters, Becky Woodward and Martha Setzer, all of Oklahoma. Memorials may be made to the Help for Health Hospice Home, in care of the Davis Funeral Home, 2203 West Main Riverton, WY 82501. On-line obituaries are available and condolences for the family may be made at: thedavisfuneralhome.com Services are under the direction of the Davis Funeral Home of Riverton.