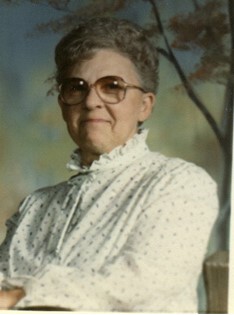 Guestbook 0
Callie M. Green, 87 of Riverton died at the home of her daughter on Tuesday, July 27. Graveside services will be held on Friday, July 30, 2010 at 1:00 p.m. at Lake View Cemetery in Shoshoni, with The Order Of Eastern Star Chapter 21 committal service. Memorials to the Arthritis Foundation in care of Davis Funeral Home would be appreciated by her Family. Callie Maxine Bellows was born in Morgan County, Mooresville, Ind., on June 13, 1923, the daughter of Calvin D. and Martha (Turley) Bellows. She attended elementary school and high school in Mooresville, graduating in 1941. She then entered nursing school at Wishard School of Nursing in Indianapolis, Ind., where she was graduated in 1944. She went on to college in Indianapolis and earned her Bachelor's of Science degree. On April 13, 1946, she married Gale H. Uhrick and they had two children. She married Richard D. Green in 1968 and they moved to Wyoming in 1969, making their home in Shoshoni until Mr. Green's death in August of 1996. Mrs. Green worked as a nurse in the old Riverton Hospital until becoming the Shoshoni School nurse, retiring from the Shoshoni schools in 1988 after 18 years of serving as school nurse. Mrs. Green was a member of the Shoshoni and Riverton Chapters of the Order of the Eastern Star. She is survived by her son, Gale D. Uhrick and partner Ann of Columbia City, Ind.; a daughter, Madelyn C. Wallage and partner of Riverton; a sister-in-law, Lucille Handy of Fort Wayne, Ind.; a brother-in-law, Merle Uhrick of Indiana; step-daughters, Carol Shesser and Janet Green; 13 grandchildren, and 16 great grandchildren. She was preceded in death by her parents, Calvin and Martha Bellows; one sister, Mildred F. Fellows in 1927; her husband, Richard D. Green in 1996, and one grandson, William Patrick Wallage in 1975. On-line obituaries are available and condolences for the family may be made at: theDavisFuneralHome.com Services are under the direction of the Davis Funeral Home of Riverton.