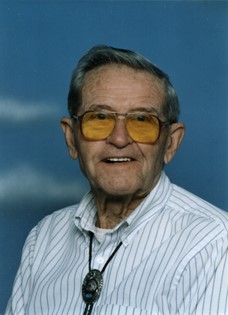 Guestbook 5
Jerry Russ Havens died on Tuesday, Aug. 24, 2010 in Riverton. He was 90. Services for Mr. Havens will be at 10 a.m. on Tuesday, Aug. 31, inside the Shoshoni Seniors' Center. A military service will follow at Lake View Cemetery in Shoshoni. Jerry Russ Havens was born on March 12, 1920, in Idaho Falls, Idaho, the son of Joseph Russ and Mildred Gladys (Stiles) Havens. He grew up in Stillwater, Minn., and then traveled the country doing odd jobs. He became a member of the Civilian Conservation Corps and, after his marriage to Betty Peulen on Aug. 20, 1941, he volunteered for the United States Army Air Corps. In December of 1941, he became a B-25 bomber pilot for the 12th Bomb Group, 87th Squadron. After flying 55 missions in World War II, Mr. Havens moved to Shoshoni and lived there until his death. Over time Mr. Havens served as Postmaster and two terms as Mayor of Shoshoni. He was involved in the City Council, VFW, Volunteer Fire Department, School Board and State Fiddlers Contest. For years he ran his own insurance and appraisal business. Using his carpentry, masonry and electrical skills, he constructed numerous buildings and homes in Shoshoni. He volunteered as a builder for Habitat for Humanity and was also a senior companion. Mr. Havens created the first automated ice vending machine in the state of Wyoming. His family said he enjoyed traveling, fishing, flying aircraft and yard work. He was preceded in death by his wife, Betty, and three sisters, Winifred Murdy, Victoria Cran and Harriet Cora Havens. Survivors include his children, Geri Ann Hahn of Yorba Linda, Calif., and Joseph Russ Havens of Phoenix, Ariz.; five grandchildren and seven great grandchildren. Memorials may be made to Habitat for Humanity, in care of the Davis Funeral Home, 2203 West Main, Riverton WY 82501