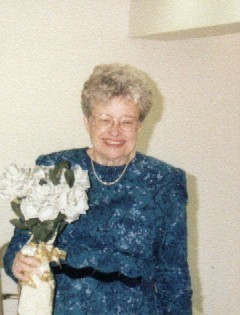 Guestbook 3
Funeral services for Juanita M. Collins of Lander are at 10 a.m. on Friday, Sept. 3, at the First Baptist Church of Lander. Pastor Scott Engelhart officiates. Interment will be at Mount Hope Cemetery.

Viewing will be from 9 to 10 a.m. Friday at the church, preceding the funeral service.

Juanita Marie Cauthorn was born in Vinita, Okla., on Feb. 17, 1929, the daughter of Jasper James Cauthorn and Blanche Marie (Shipley) Cauthorn. She grew up in Vinita.

She was a housewife, having married Russell Elbert Collins on Jan. 12, 1950, in Vinita, Okla.

The family lived in various Wyoming communities while Mr. Collins worked in road construction. They lived in Dubois for 22 years and in Lander for the past 19 years, where they retired to enjoy the community.

Together, Mr. and Mrs. Collins attended the First Baptist Church of Lander.

Her family said she enjoyed knitting, sewing, spending time with her grandchildren, great grandchildren, and family, flower gardening, and all types of crafts and handiwork.

She was preceded in death by her parents, grandparents, three brothers, a sister and her daughter, Yolonda “Lonnie” Rich on Feb. 3, 2010.