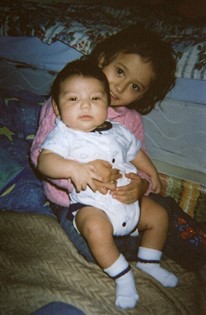 Joint services for Arapahoe residents sister and brother Elena Frazier TalksDifferent and SnowShield TalksDifferent will be held at 10:00 a.m. Saturday, July 21, 2007 at St. Stephen’s Catholic Church. The Rev. Father Robert Hilbert, SJ will officiate. Interment will follow at Arapaho Catholic Cemetery. A feast will be held after the burial at Eagle Hall.

SnowShield TalksDifferent died Saturday, July 14, 2007 at the scene of an automobile accident on 17 Mile Road. He was 6 months old.

Elena TalksDifferent died Monday, July 16, 2007 at Primary Children’s Medical Center in Salt Lake City, Utah, as a result of injuries sustained in the same accident. She was 4 years old.