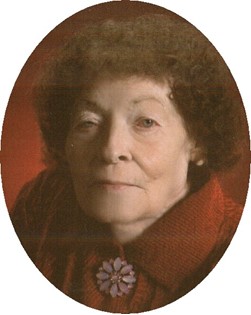 Guestbook 4
Maudie May Hudson Clapp, 96 of Kinnear, died Saturday afternoon, Sept. 4, 2010 at the Help for Health Hospice Home in Riverton. Funeral services are at 10 a.m.,on Wednesday, Sept. 8, at the Davis Funeral Home of Riverton. Burial will take place at Mountain View Cemetery in Riverton, next to her husband Claud. A viewing will be from 5:30 to 8 p.m., Tuesday, Sept. 7, at the funeral home. Maudie May Stewart was born on Oct. 4, 1913, in Hay Springs, Nebr., to Arthur E. Stewart and Leona (Myers) Stewart. She married Claud "Heavy" Hudson on March 4, 1934 in Hot Springs, S.D. Together they moved to Kinnear in 1939 where they were active in starting a blacksmith shop and building the Nazarene Church. Mrs. Hudson was a homemaker and helped her husband and family milking cows, working their 20-acre homestead, working as the storekeeper for the Kinnear Hardware Store, and bookkeeper for the blacksmith shop. Mrs. Hudson was a charter member of the Sunnyside Church of the Nazarene. She served as a Sunday school teacher, missionary president, youth leader, board member, and worship leader. Her family said she loved to hunt elk, deer, and antelope. The couple went hunting together many times. The family said she was a crack shot and avid rider and horseperson, a great cook entertaining family at Christmas, birthdays and holidays. She taught music to her children and grandchildren. They said she also was their spiritual support. Her hobbies included animals, birds, and picking flowers. She raised a bobcat, which later was in a movie with Captain Kangaroo. She was also an artist and loved to play the guitar, piano, and sing. Mr. Hudson preceded her in death in June of 1991. She later married C.E. "Pill" Clapp in April of 1994. He preceded her in death in June of 1998. Survivors include her son, Jim Hudson and his wife Virginia of Alaska; two daughters, Deryce Clapp and husband Clarence of Casper, Connie Mendenhall and husband Marvin of Kinnear; nine grandchildren, 21 great grandchildren, and five great-great grandchildren. She was preceded in death by her parents, two husbands, Claud "Heavy" Hudson and C.E. "Pill" Clapp; two brothers, Gene and George Stewart; three sisters, Laura Waggoner, Myrtle Lee, and Silvia McCullough. Memorials may be made to the Sunnyside Church of the Nazarene Missionary Fund, in care of the Davis Funeral Home, 2203 West Main Street, Riverton, WY 82501. On-line obituaries are available and condolences for the family may be made at: theDavisFuneralHome.com Services are under the direction of the Davis Funeral Home of Riverton.